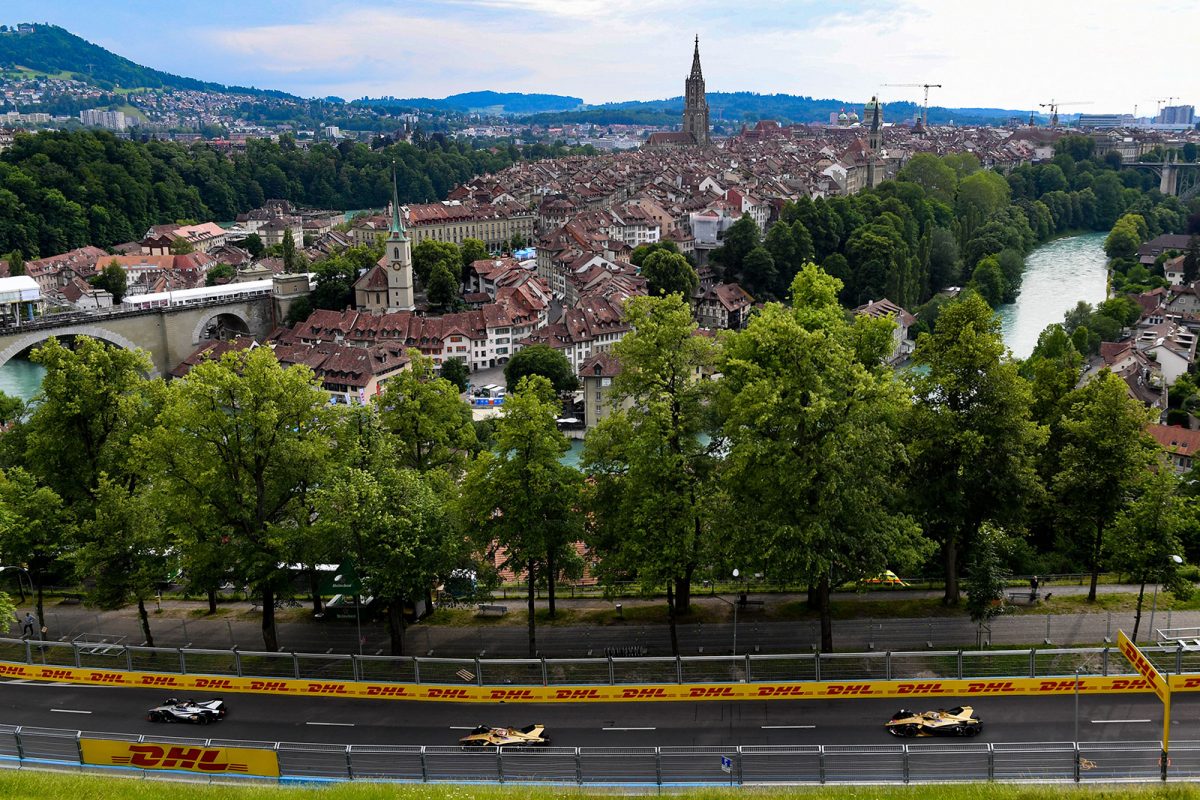 Jean-Eric Vergne held off the advances of Mitch Evans and weathered a late rain shower to win in Bern and extend his lead at the top of the ABB FIA Formula E Championship standings to 32-points over Lucas di Grassi.

The DS TECHEETAH driver led from lights-to-flag, picking-up three points for Julius Baer pole position in the process and pulling away from his nearest rivals in the championship chase – building a buffer before heading to the season finale in New York. 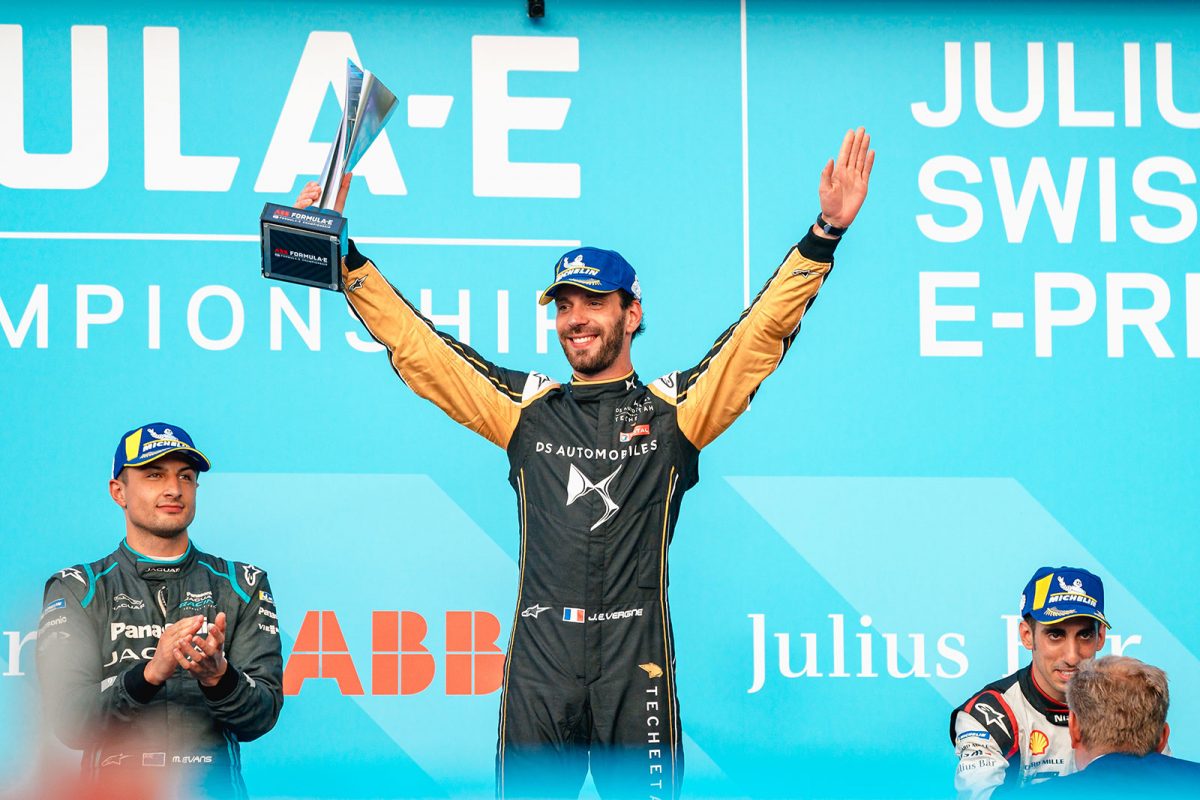 However, it wasn’t a walk in the park for Vergne, who was hurried and hassled by Evans all the way to the chequered flag. The Panasonic Jaguar Racing pilot put pressure on Vergne, looming large in his mirrors, but was unable to pass with the Frenchman making his car as wide as possible.

Despite trying to take the initiative and activating ATTACK MODE earlier than expected, Vergne mirrored every move Evans made and hung on to victory with an assured and astute drive. Not even a light sprinkling of rain in the latter stages could dampen Vergne’s mood. 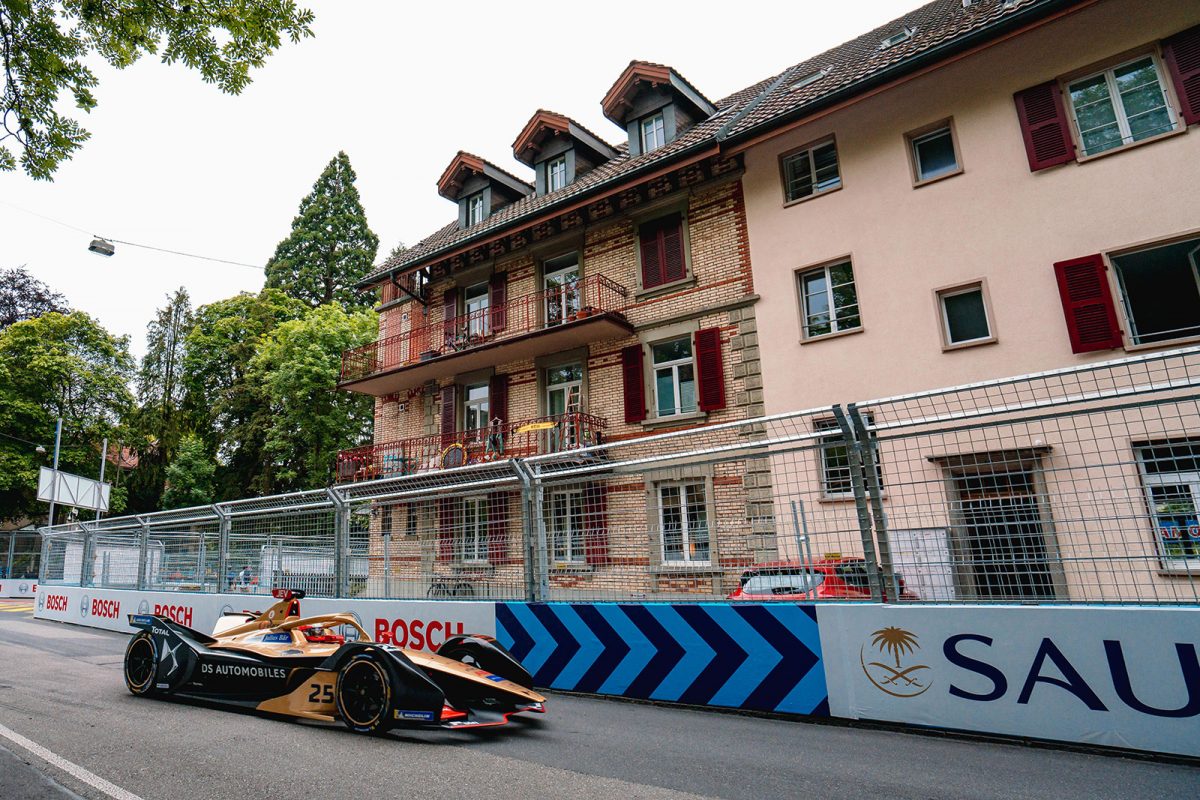 Sebastien Buemi brought his Nissan e.dams car home in third to round-out the podium places and receive the adulation of the adoring Swiss fans. Buemi beat Andre Lotterer at the line, but Lotterer later dropped down the order after being handed a post-race time penalty for ignoring the pit exit light.

With Lotterer’s penalty applied, Sam Bird was promoted to fourth – making the most of his good fortune after suffering a puncture in the skirmishes at the start, that eventually led to the race coming to a stop. 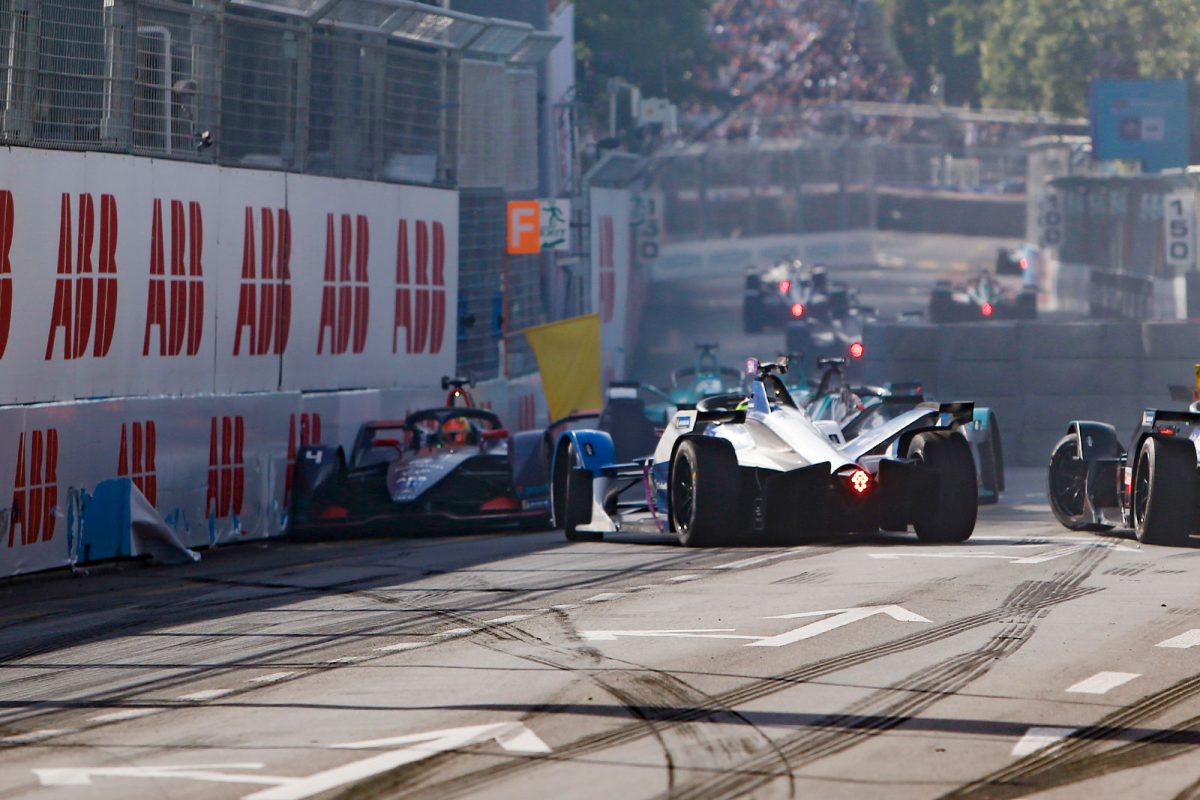 Seconds in, a jam at Turn 1 caused by a collision between Mahindra Racing’s Pascal Wehrlein and Geox Dragon’s Max Gunther brought out the red flag, pausing play. Involved in the incident after he was shunted by Mahindra’s Jerome d’Ambrosio, Envision Virgin Racing’s Robin Frijns was left stranded on track with a broken drivetrain, ending his race almost before it had even started.

Having cleared the track, the remaining cars returned to the pit lane to repair the damage, reorder as they started the race and restart behind the BMW i8 Safety Car with 44 minutes left on the clock. 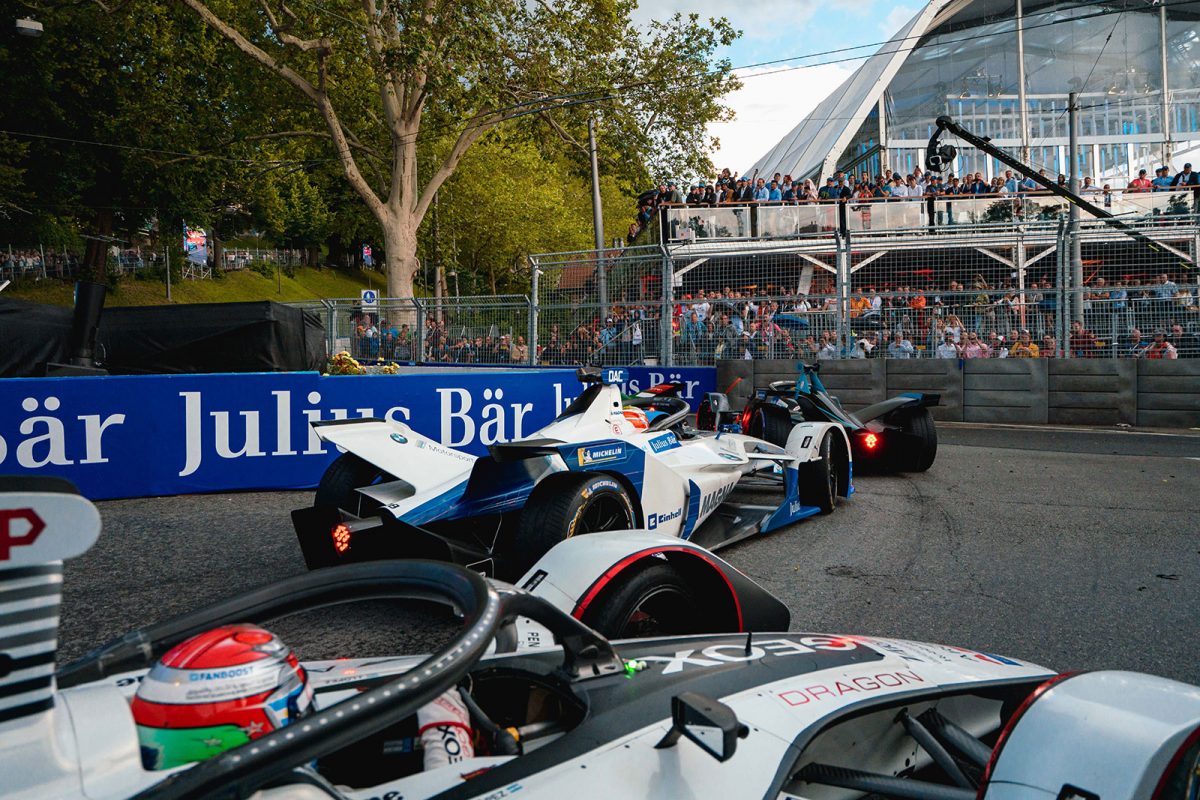 Although he got caught-up in the first-corner collision, Max Gunther gathered his composure and carried his car to a career-best fifth position.

Daniel Abt was a place further back in sixth, ahead of Alex Lynn in seventh and Felipe Massa in eighth.

Lucas di Grassi leapt up the field to ninth after a lacklustre qualifying left him in a lowly grid slot. The final points-paying position was filled by Stoffel Vandoorne, who also vaulted up the order from 15th to 10th.

With the title up for grabs and eight drivers still mathematically in contention, the ABB FIA Formula E Championship crosses the pond for the season finale showdown – set against the backdrop of the stunning New York City skyline on July 13 & 14. Can anyone catch Vergne? 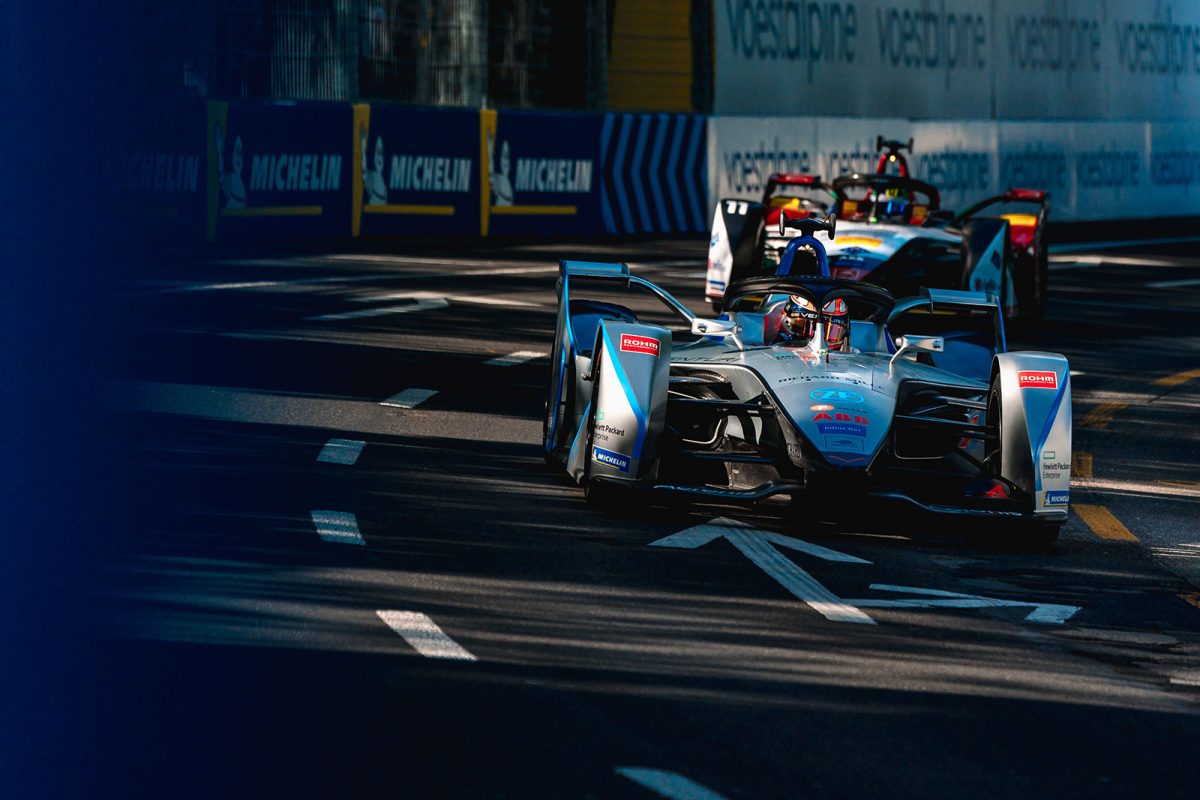 Jean-Eric Vergne
“I arrived here like a zombie after Le Mans but nevertheless, I think the team helped me massively to do a good job. They gave me a fantastic car, especially in qualifying. At the end of the race I was definitely slower than Mitch – he was really on it! I wasn’t that fast, but I wasn’t taking any massive risks either, particularly in the last laps when the rain came. I couldn’t believe it… my engineers were telling me rain was coming and I could see the drops on my visor. Nothing is comfortable in Formula E and everything can change so quickly. It’s a good lead – it’s a bigger lead than the one I had last year – but I’m not thinking about it too much. I’ll arrive in New York with the same wish to win the race and do the job. Simple as that.”

Mitch Evans
“It was actually harder than I expected. I was hoping it was going to be a bit of a slam dunk when I was on ATTACK MODE, but it didn’t really materialise. I was so close and I got a good overlap but it would’ve been quite risky to hang around the outside at Turn 3, or other places and he was defending well. JEV is a truly good defender and it would’ve meant taking a big risk to try and get by. I felt extremely fast today and I want to thank everyone in the team for handing me a great car and it feels great to be on the podium. But ultimately, I felt like I had the pace to win.”

Sebastien Buemi
“I think it was an amazing day for me, even if it’s only third place. It feels like a win – it was amazing to have my family here. I was told we had three per cent more energy but there isn’t much you can do here, it’s very difficult to overtake so you can’t take lots of risks and cause a crash. I decided to secure third place today and qualifying was the determining factor. In Berlin it was really easy to overtake. There it would have been a completely different outcome. However, here it is what it is, and we need to live with it. In New York it’s usually simpler to overtake… so it should make for a good final couple of races.”