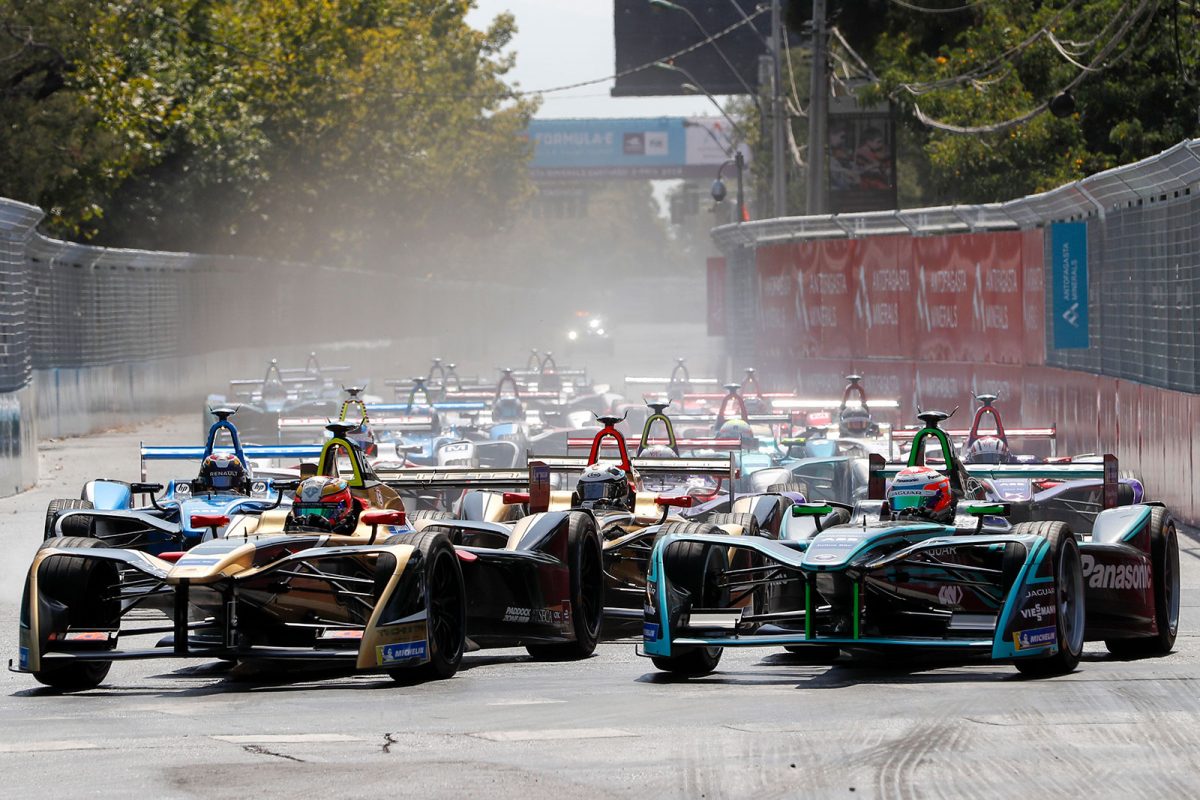 Jean-Eric Vergne fended off his team-mate Andre Lotterer in a tense fight around the streets of Santiago to claim his second victory in Formula E and the first one two in the history of the electric street racing series. The pair exchanged blows in the closing stages of the race with a gaggle of cars waiting behind to pounce, ensuring a nail-biting finish to the inaugural E-Prix in the Chilean capital. 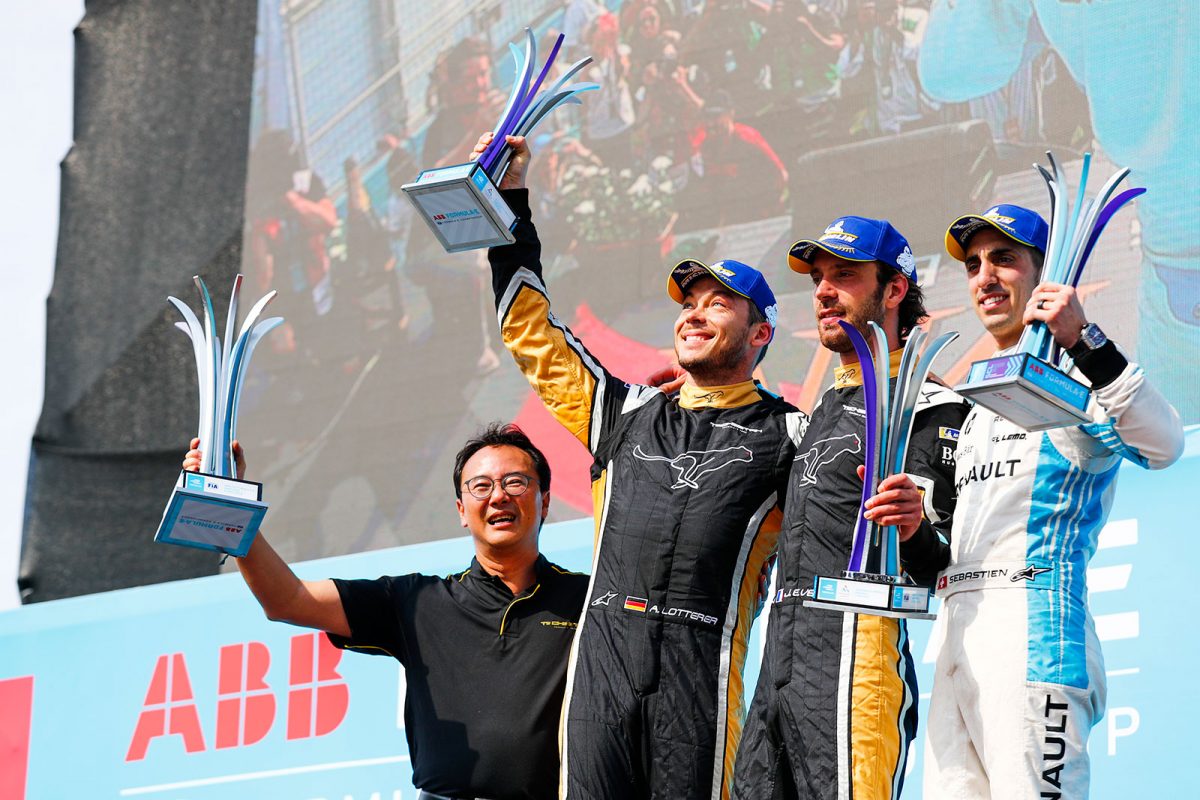 Vergne led away from Julius Baer pole position with a number of cars making moves behind. Lotterer jumped Sebastien Buemi off the line to move into second place, but Panasonic Jaguar Racing driver Nelson Piquet Jr. caught them both unaware with a bold late-braking move around the outside of the first corner. As the field streamed through the opening section, the squeeze came in the mid-field with Jose Maria Lopez running out of road in close proximity with Sam Bird and hitting the wall on the outside of Turn 2.

The Qualcomm safety car was deployed to clear both Lopez and the stricken Venturi of Maro Engel who went into the barriers at Turn 7. Piquet looked to have lost out on the restart, but piled the pressure on Vergne with a move for the lead only a few corners later. 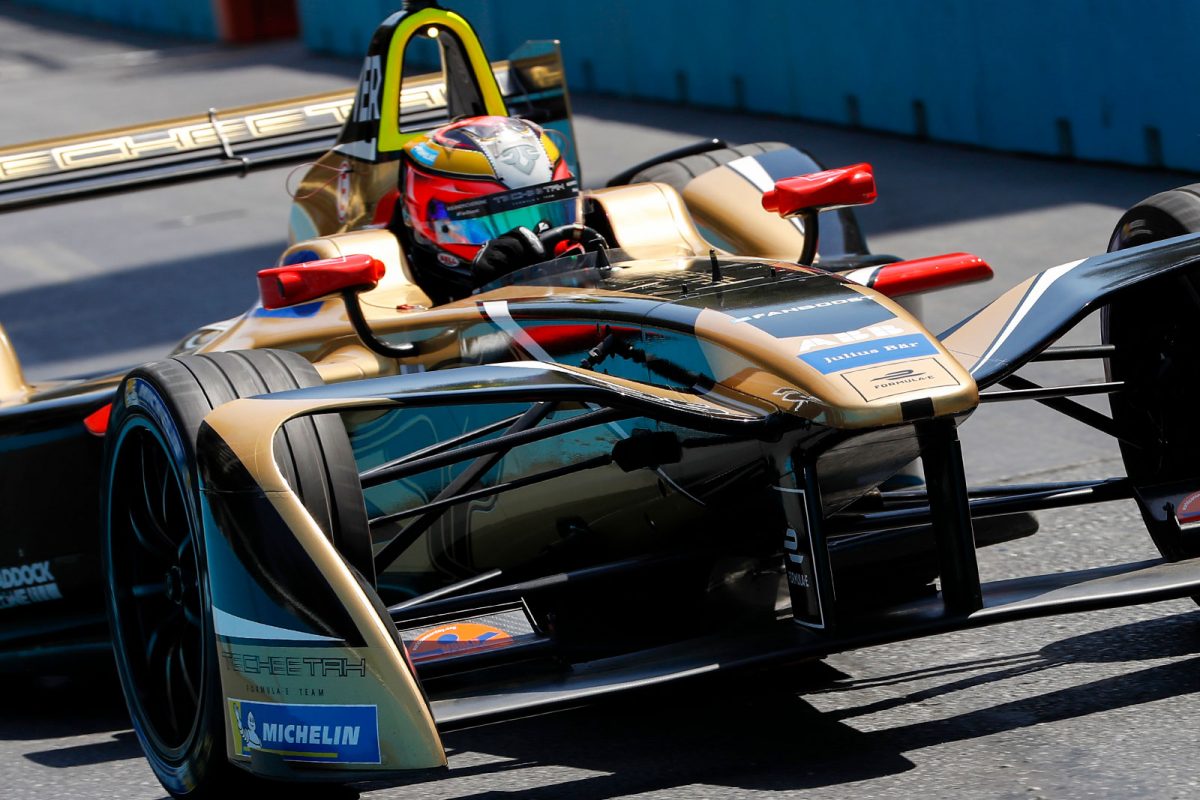 Vergne placed his car well and held off a fast-charging Piquet despite a bump from behind, which wouldn’t be the only close-call in his wing mirrors for the remainder of the race. Approaching the pit-stop phase, Vergne started to extend his lead to over three seconds as Piquet fell into the grasps of Lotterer. The German scythed his way into second place past Piquet and set his sights on his team-mate.

Lotterer slowly reeled in Vergne moving into his slipstream and drew alongside into the main overtaking point at Turn 1. Both drivers came perilously close to exchanging paintwork, but Vergne held his nerve and forced Lotterer to retreat.

However, Lotterer hadn’t thrown in the towel yet and tried to mirror the move again but misjudged his braking and hit the back of Vergne. Smoke poured from Vergne’s wheels as his team-mate was pushing him from behind. 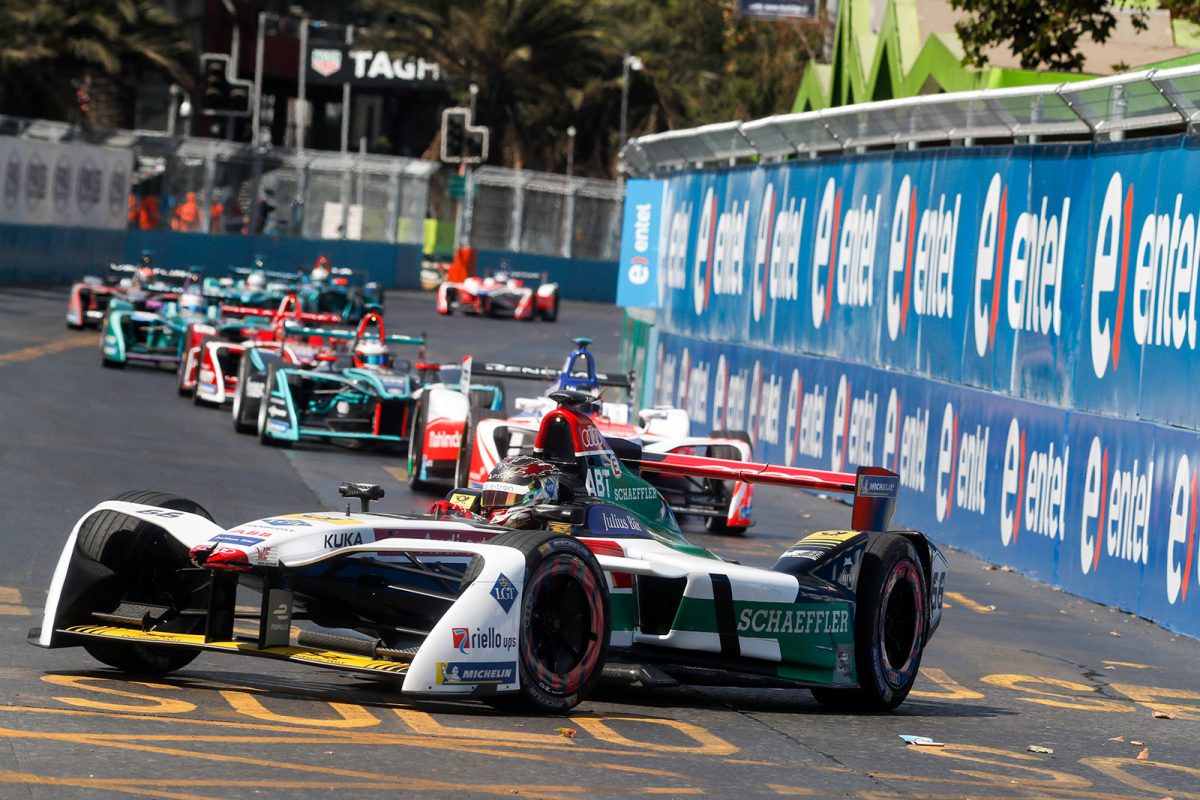 Despite the helping hand from Lotterer, both cars managed to avoid the wall and the threat of other cars behind to deliver maximum points for TECHEETAH and vault the team to the top of the standings. It marks the first victory for Vergne since the season-finale in Montreal last year, which was also his first in Formula E.

Jean-Eric Vergne, TECHEETAH, said: “The race has been great for me today, I qualified first and won the race, it cannot get any better. I think the first stint was really good and then after a few laps in the second car my lap trigger activated one extra lap. I have no idea how it happened but, basically I was doing the race one lap longer – that’s why I had a huge amount of pushing from my team-mate Andre who was then on a different strategy. It was fair racing – at one point we did collide but there was nothing really we could do, I decided to go on the inside and he went differently so we just collided. I think we had eight wheels locked actually, so I’m extremely lucky. It’s the first one-two in the history of Formula E!” 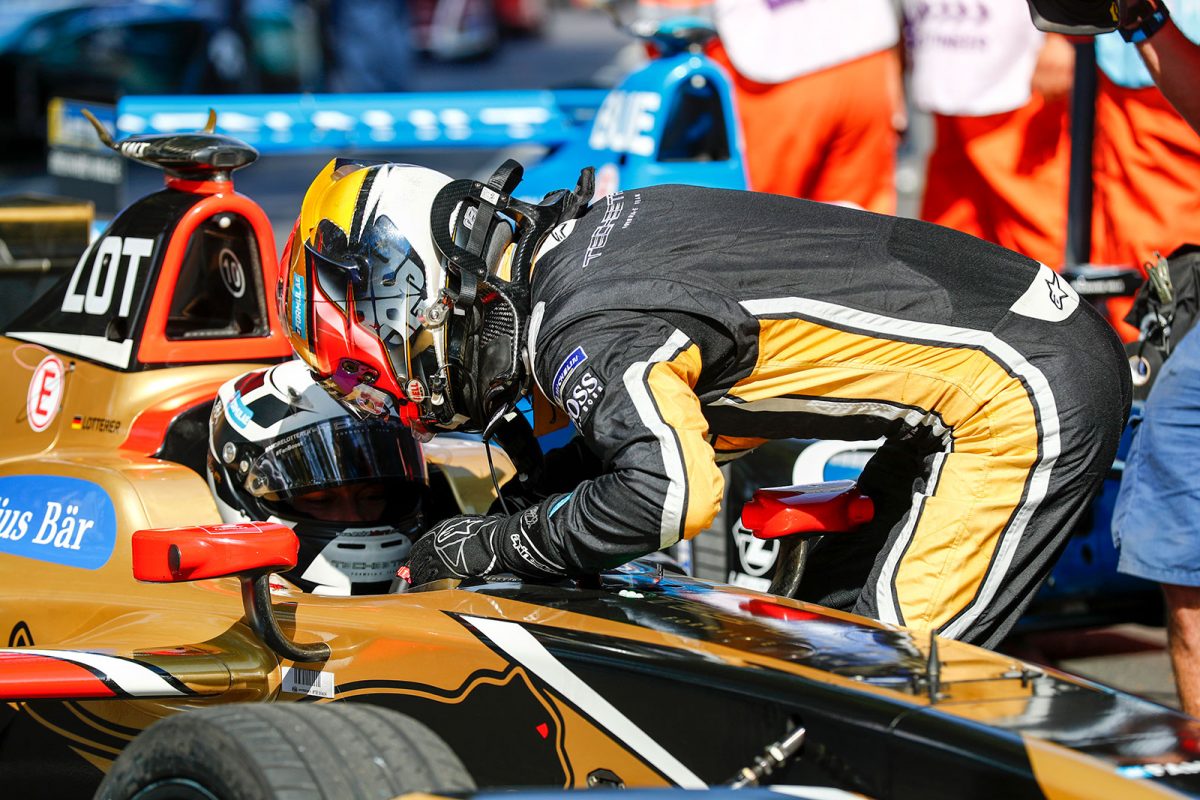 Joining the two TECHEETAH drivers on the podium was Sebastien Buemi, showing once again that the form of Renault e.dams in Hong Kong was merely a blip. Buemi slipped backwards on the long run down into the first corner and struggled to match the pace of his rivals in the early phase of the race.

Buemi and Bird re-enacted their close duel in Marrakesh in the battle for fourth place, with the DS Virgin Racing driver hounding the back of his gearbox. The group held station until the mid-race car swaps, which saw Rosenqvist leap up the order ahead of Bird – allowing Buemi to focus on Piquet and surpass his fellow champion to secure a spot on the podium. 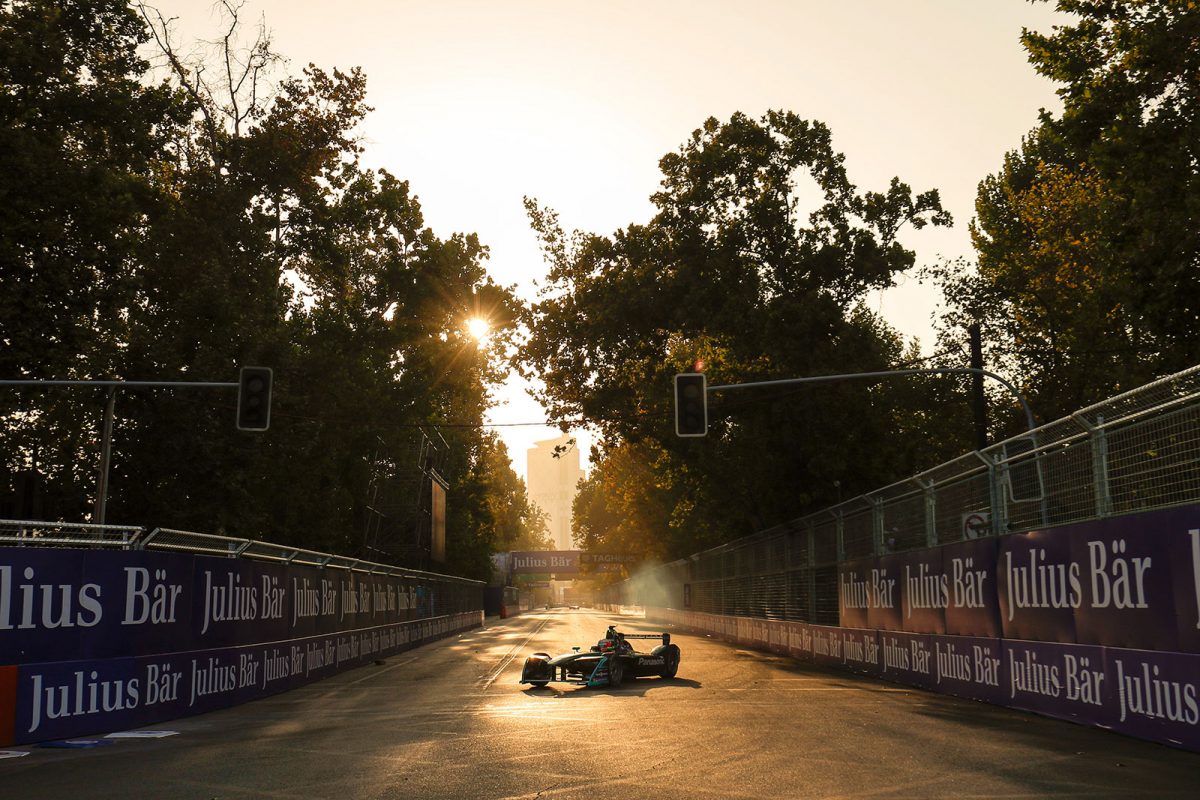 Rosenqvist – who entered Santiago as the points leader and the winner of the past two races – started way back in 14th after a dismal qualifying session, but salvaged points in fourth place.

Bird picked-up the additional point for Visa fastest lap and took the chequered flag in fifth after a slow pit-stop and benefitting from Piquet’s late lunge on Buemi into Turn 1. Piquet looked to re-take the position he lost earlier but locked his brakes and ended up losing time reversing out of the run-off area. 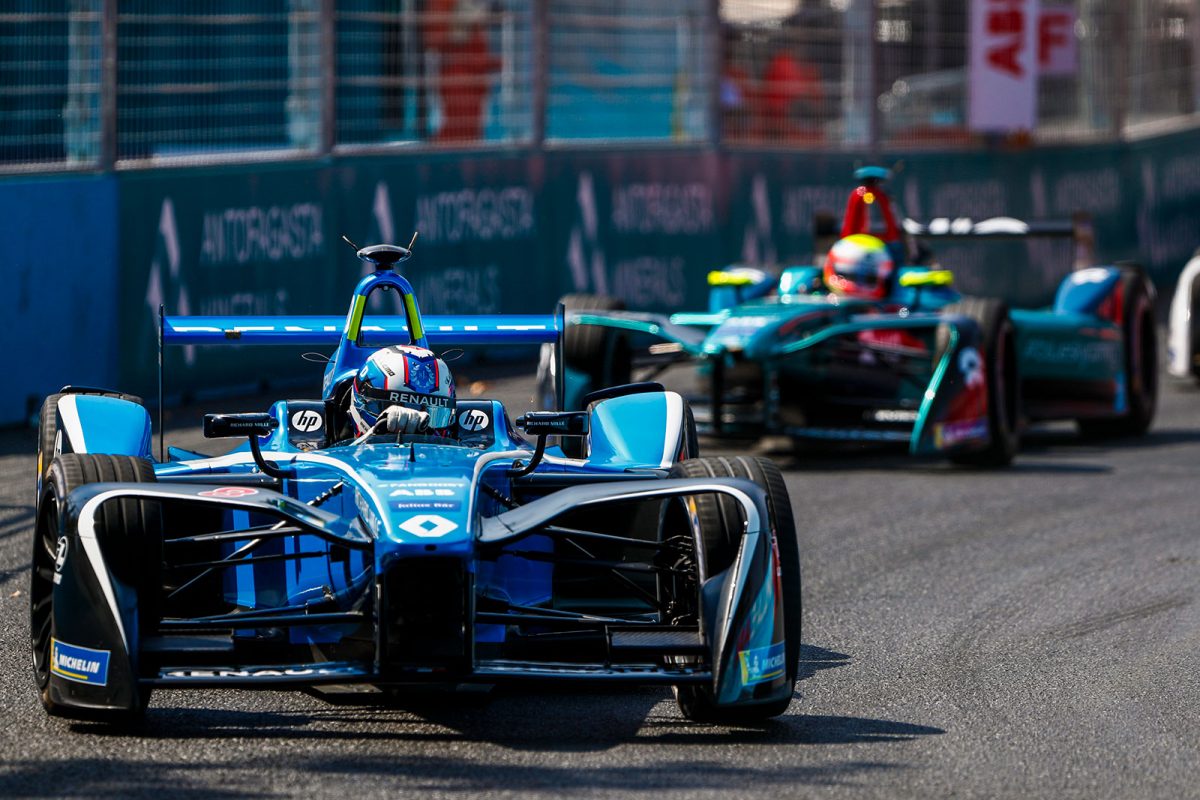 The next stop on the Formula E calendar sees the series return to Autodromo Hermanos Rodriguez for the third edition of the Mexico City E-Prix for round five of the ABB FIA Formula E Championship on March 3.

Posted in E-Motorsport, Formula E
← In the UK new research shows some electric vehicles are actually rising in valuePorsche plans to invest more than six billion euro in electromobility by 2022 →