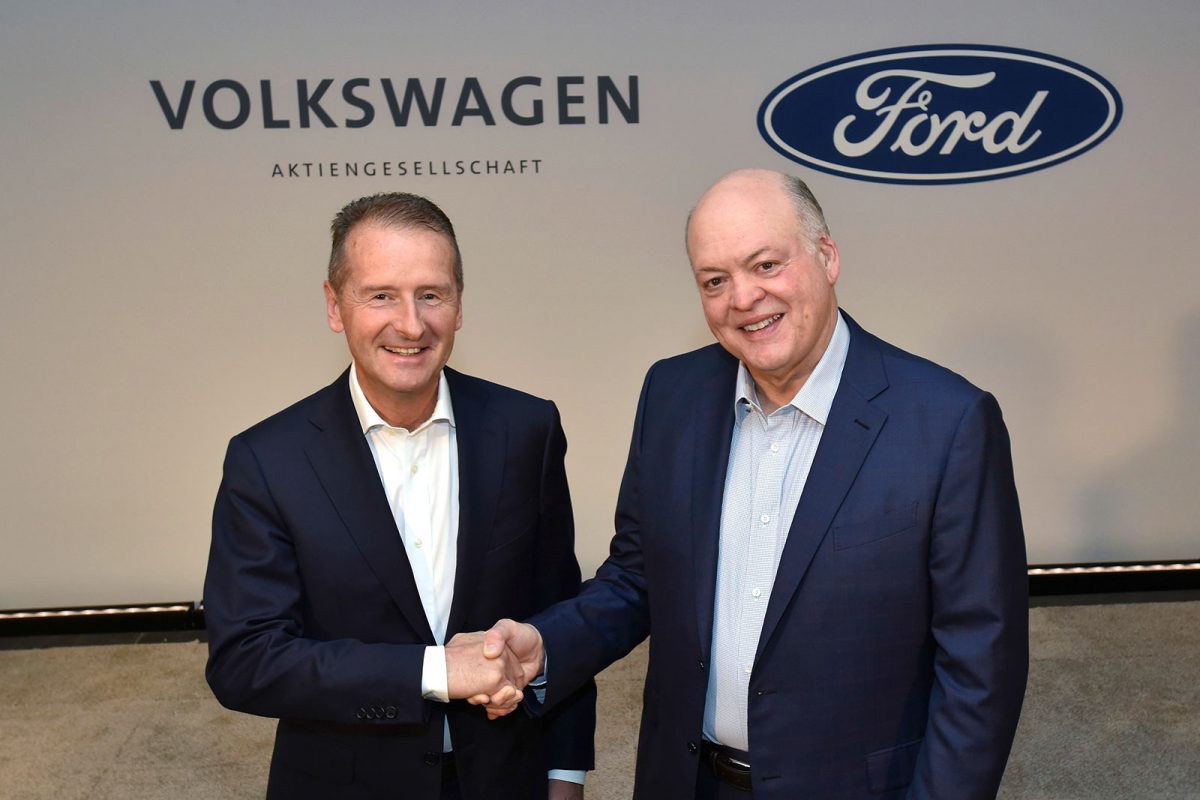 Ford Motor Company and Volkswagen today announced they are expanding their global alliance to include electric vehicles. Ford will use Volkswagen’s electric vehicle architecture and Modular Electric Toolkit (MEB) to design and build at least one high-volume fully electric vehicle in Europe for European customers starting in 2023, more efficiently advancing its promise to deliver expressive passenger cars while taking advantage of Volkswagen’s scale.

Ford will become the first additional automaker to use Volkswagen’s dedicated electric vehicle architecture and Modular Electric Toolkit – or MEB – to deliver a high-volume zero-emission vehicle in Europe starting in 2023.

Ford expects to deliver more than 600,000 European vehicles using the MEB architecture over six years, with a second all-new Ford model for European customers under discussion. 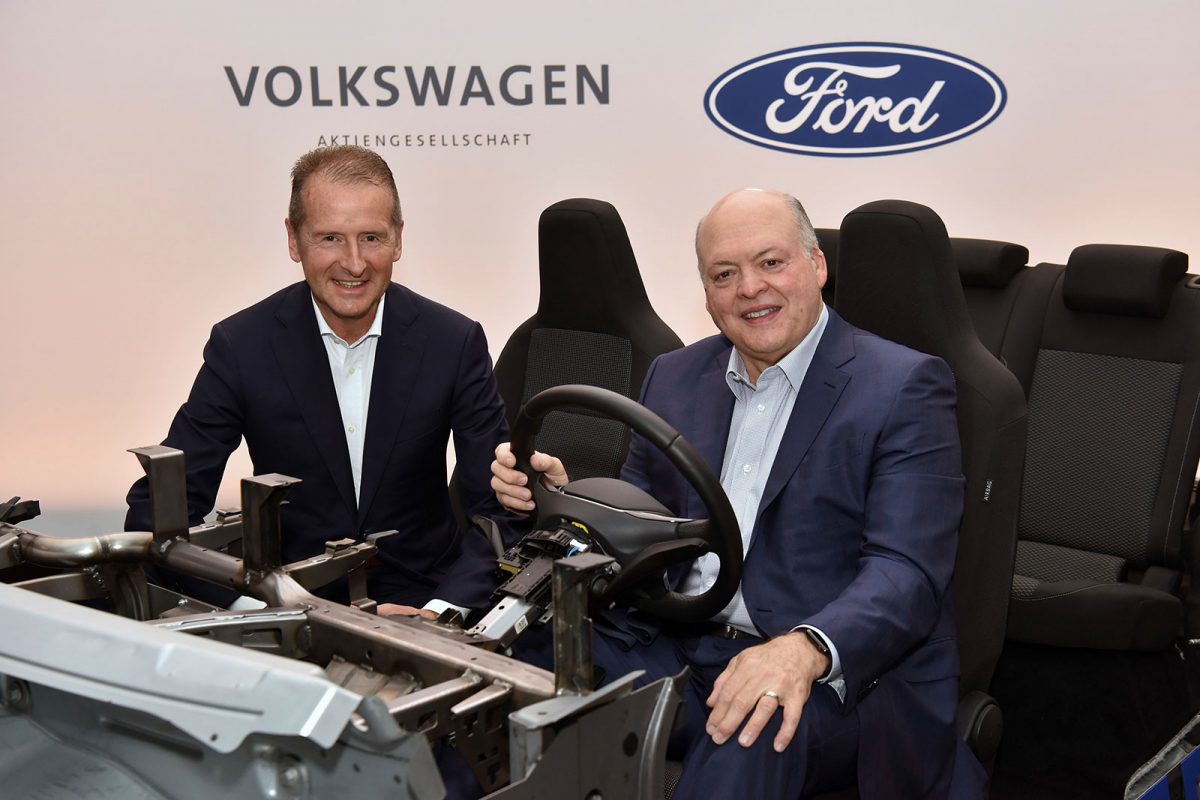 Both companies also will continue to target additional areas where they can work together on electric vehicles – a key strategic priority for both companies as they drive to accelerate the transition to sustainable and affordable mobility.

The agreement with Ford is a cornerstone in Volkswagen’s electric strategy, supporting the growth of the e-mobility industry and facilitating global efforts to reach the Paris 2050 Agreement. 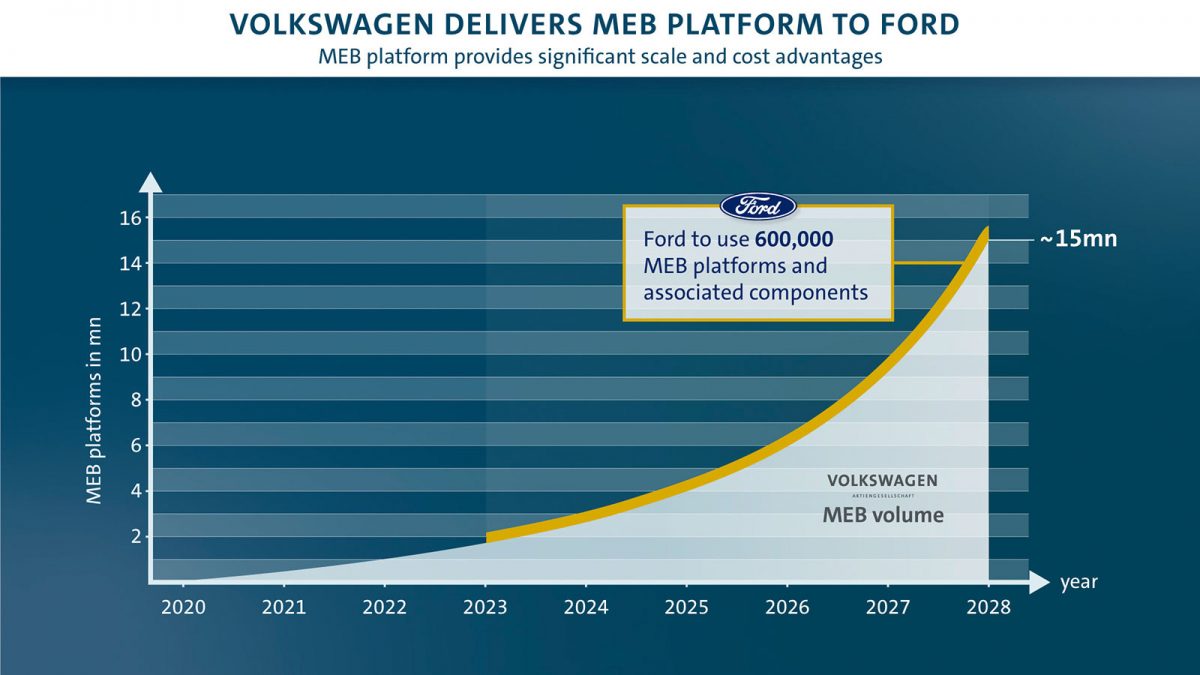 For Ford, using Volkswagen’s MEB architecture is part of its more than $11.5 billion investment in electric vehicles worldwide – and supports Ford’s commitment to offer its European customers a broad range of electric vehicles while meeting its sustainability commitments.

“Looking ahead, even more customers and the environment will benefit from Volkswagen’s industry-leading EV architecture. Our global alliance is beginning to demonstrate even greater promise, and we are continuing to look at other areas on which we might collaborate,” Diess said. “Scaling our MEB drives down development costs for zero-emissions vehicles, allowing for a broader and faster global adoption of electric vehicles. This improves the positions of both companies through greater capital efficiency, further growth and improved competitiveness.” 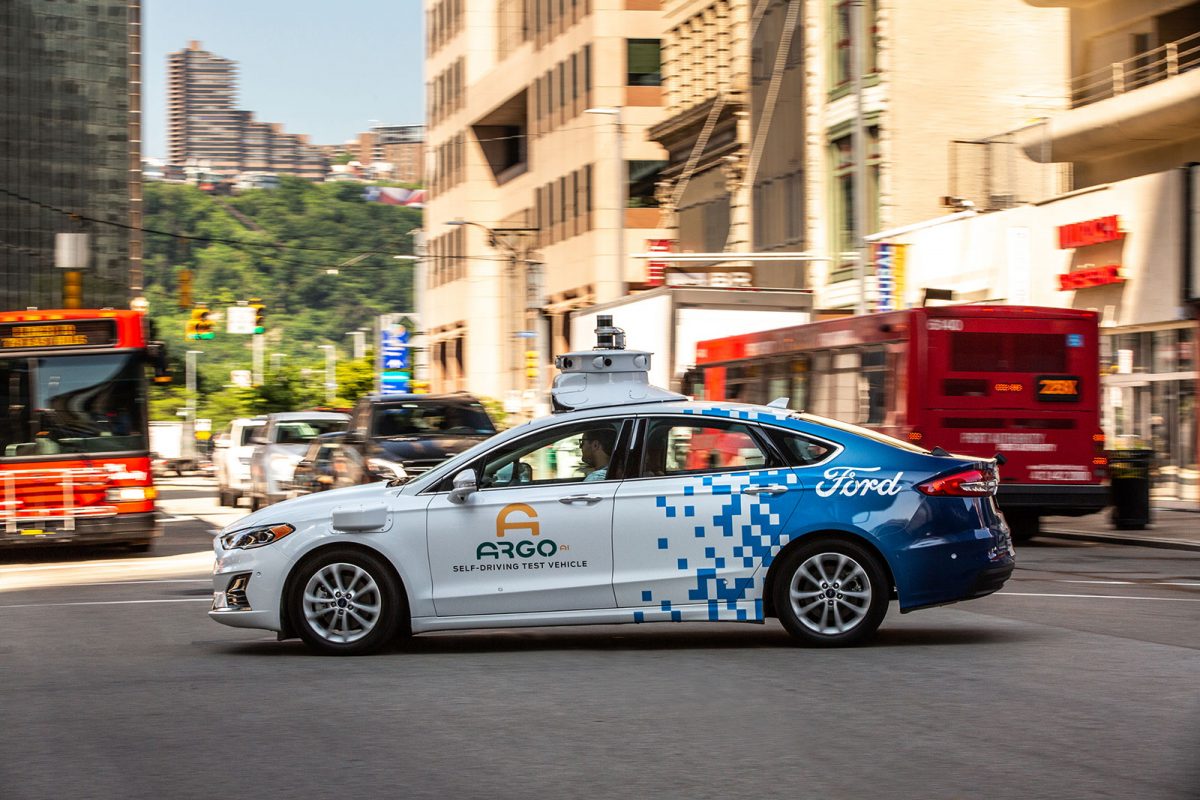 Working together with Ford and Volkswagen, Argo AI’s self-driving system (SDS) is the first with commercial deployment plans for Europe and the U.S. Plus, being able to tap into both automakers’ global reach, Argo AI’s platform has the largest geographic deployment potential of any autonomous driving technology to date. Volkswagen and Ford independently will integrate Argo AI’s SDS into purpose-built vehicles to support the distinct people and goods movement initiatives of both companies.

“While Ford and Volkswagen remain independent and fiercely competitive in the marketplace, teaming up and working with Argo AI on this important technology allows us to deliver unmatched capability, scale and geographic reach,” Hackett said. “Unlocking the synergies across a range of areas allows us to showcase the power of our global alliance in this era of smart vehicles for a smart world.” 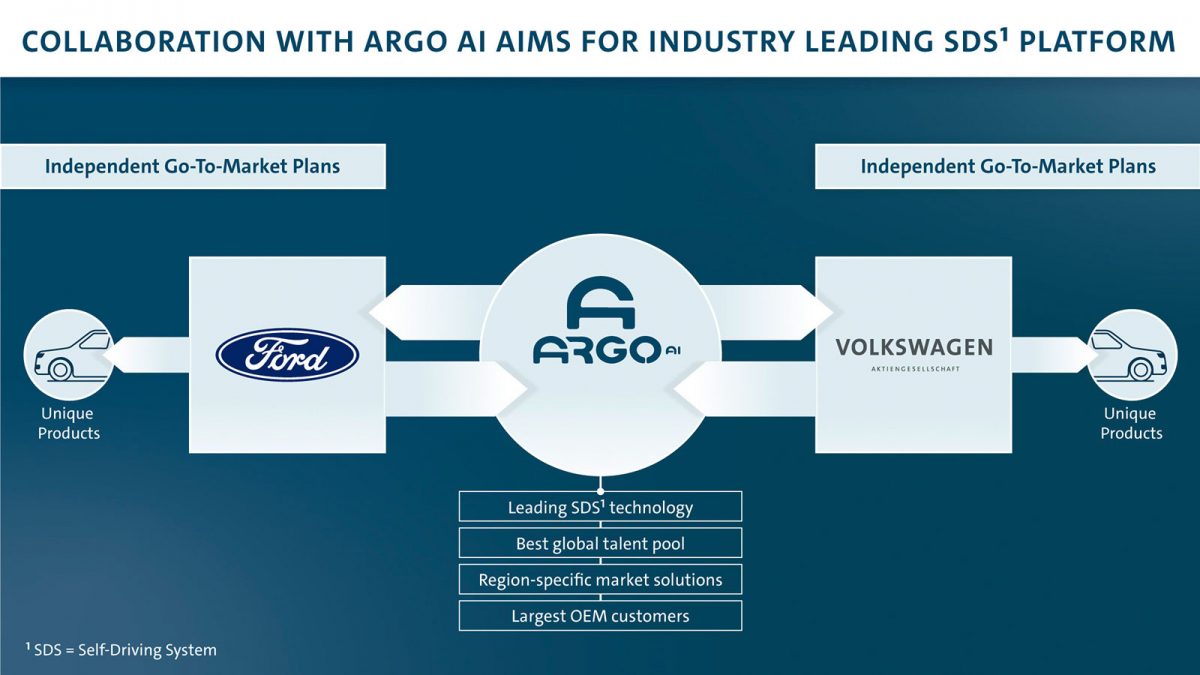 Volkswagen will invest $2.6 billion in Argo AI by committing $1 billion in funding and contributing its $1.6 billion Autonomous Intelligent Driving (AID) company, which includes more than 200 employees – most of whom have been developing self-driving technology for the Volkswagen Group.

As part of the transaction, Volkswagen also will purchase Argo AI shares from Ford for $500 million over three years. Ford will invest the remaining $600 million of its previously announced $1 billion cash commitment in Argo AI. The full transaction represents a valuation for Argo AI that totals more than $7 billion. Both automakers see significant potential, including profitable growth by tapping new business areas tied to autonomous technology.

Argo AI plans to work closely with Ford and Volkswagen to provide the autonomous vehicle technology the automakers need to deliver fully integrated self-driving vehicles that can be manufactured at scale for safe, reliable and durable deployment in ride sharing and goods delivery services. 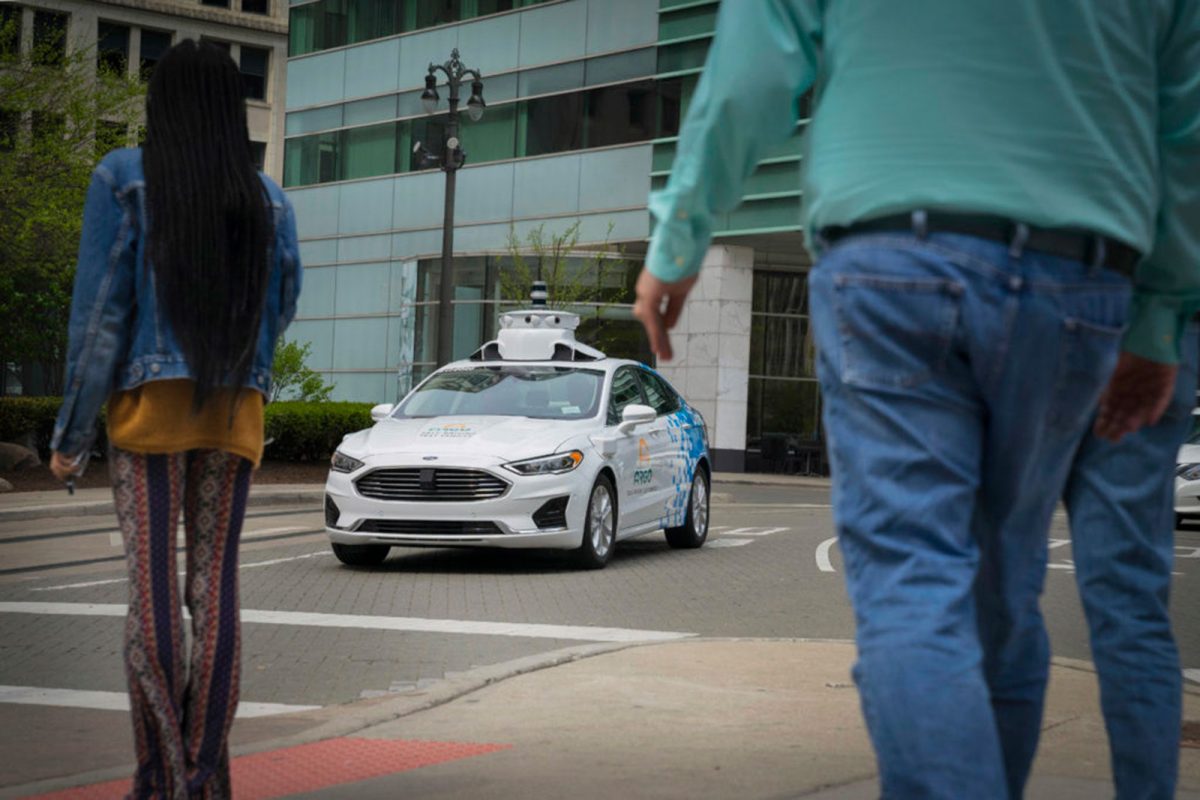 “Argo AI is fortunate to have a world-class team  due to our clear mission and the commitment to deployment from our partners, and together with AID employees, we will have a global workforce to  attract even more of the best talent,” said Salesky, co-founder of Argo AI. “Plus, thanks to Ford and Volkswagen, Argo AI technology could one day reach nearly every market in North America and Europe, applied across multiple brands and to a multitude of vehicle architectures.”

Based in Munich, Germany, AID will become Argo AI´s new European headquarters and will be led by AID’s current CEO Karlheinz Wurm. With the addition of AID employees, Argo AI will grow from 500 to over 700 employees globally.

In addition to its global headquarters in Pittsburgh, Pa., the new location marks Argo AI’s first engineering center in Europe and the fifth globally in addition to Dearborn, Mich.; Cranbury, NJ; and Palo Alto, Calif. Collaborating with Ford, Argo AI also is testing its technology in Miami and Washington, D.C., where together they plan deployment of commercial services.