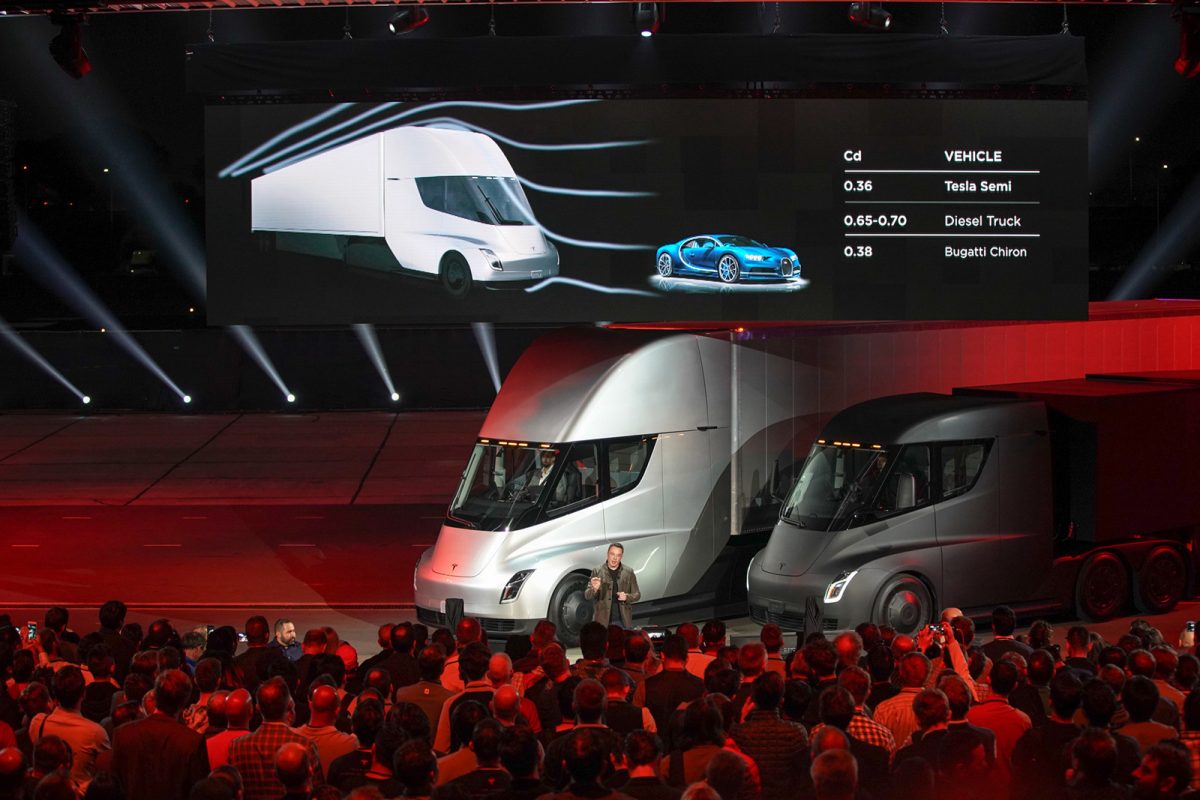 Tesla CEO Elon Musk unveiled the Tesla Semi at an event in Los Angeles in front of a crowd of “potential” truck buyers. Musk has described electric trucks as Tesla’s next big effort to move the economy away from fossil fuels. The Tesla Semi has been designed to deliver a far better experience for truck drivers, while increasing safety and significantly reducing the cost of cargo transport.

It’s certainly impressive performance wise and fully loaded in consumes less than two kilowatt-hours of energy per mile. This should give it a range of 800kms fully loaded and at highway speed.

The full specifications from the Tesla press release are below. 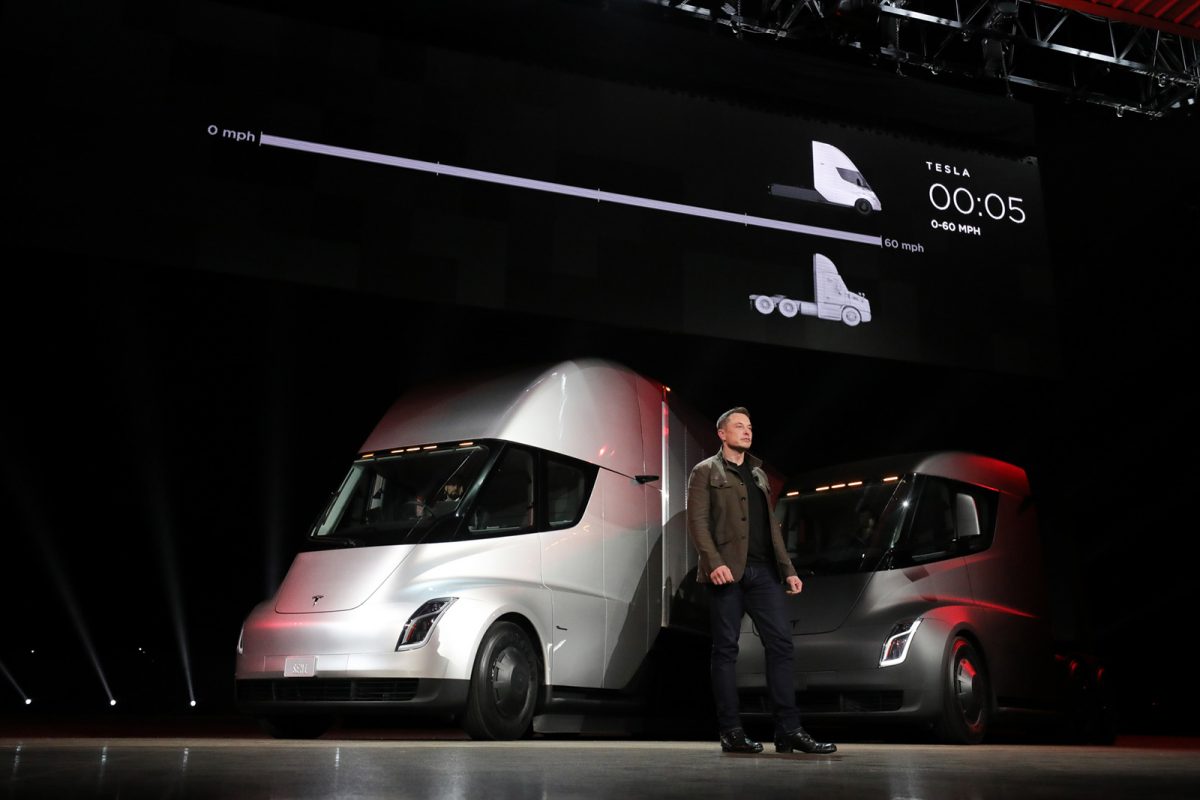 Without a trailer, the Tesla Semi achieves 0-60 mph in five seconds, compared to 15 seconds in a comparable diesel truck. It does 0-60 mph in 20 seconds with a full 80,000-pound load, a task that takes a diesel truck about a minute. Most notably for truck drivers and other travelers on the road, it climbs 5% grades at a steady 65 mph, whereas a diesel truck maxes out at 45 mph on a 5% grade. The Tesla Semi requires no shifting or clutching for smooth acceleration and deceleration, and its regenerative braking recovers 98% of kinetic energy to the battery, giving it a basically infinite brake life. Overall, the Semi is more responsive, covers more miles than a diesel truck in the same amount of time, and more safely integrates with passenger car traffic. 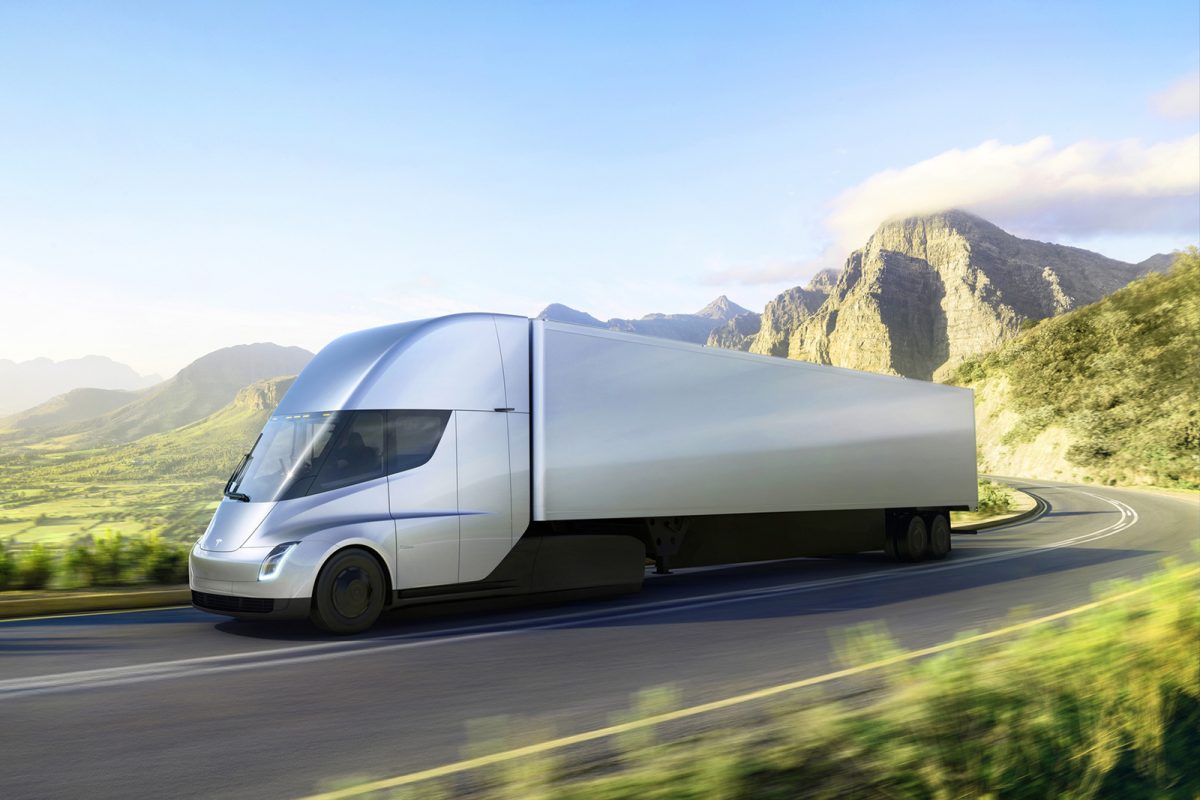 Megachargers, a new high-speed DC charging solution, will add about 400 miles in 30 minutes and can be installed at origin or destination points and along heavily trafficked routes, enabling recharging during loading, unloading, and driver breaks. 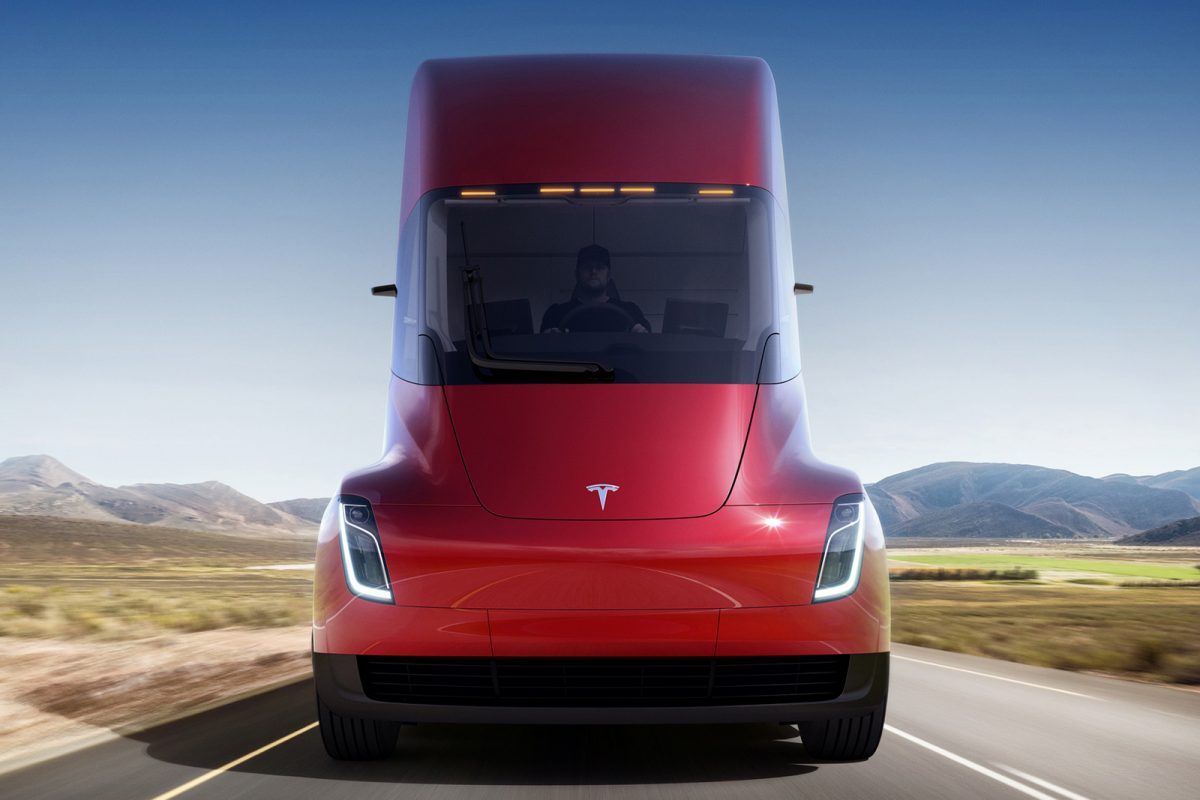 The Tesla Semi’s all-electric architecture is designed to have a higher safety standard than any other heavy-duty truck on the market, with a reinforced battery that shields the Semi from impact and gives it an exceptionally low center of gravity. Its windshield is made of impact resistant glass. Jackknifing is prevented due to the Semi’s onboard sensors that detect instability and react with positive or negative torque to each wheel while independently actuating all brakes. The surround cameras aid object detection and minimize blind spots, automatically alerting the driver to safety hazards and obstacles. With Enhanced Autopilot, the Tesla Semi features Automatic Emergency Braking, Automatic Lane Keeping, Lane Departure Warning, and event recording.

Tesla Semi can also travel in a convoy, where one or several Semi trucks will be able to autonomously follow a lead Semi. 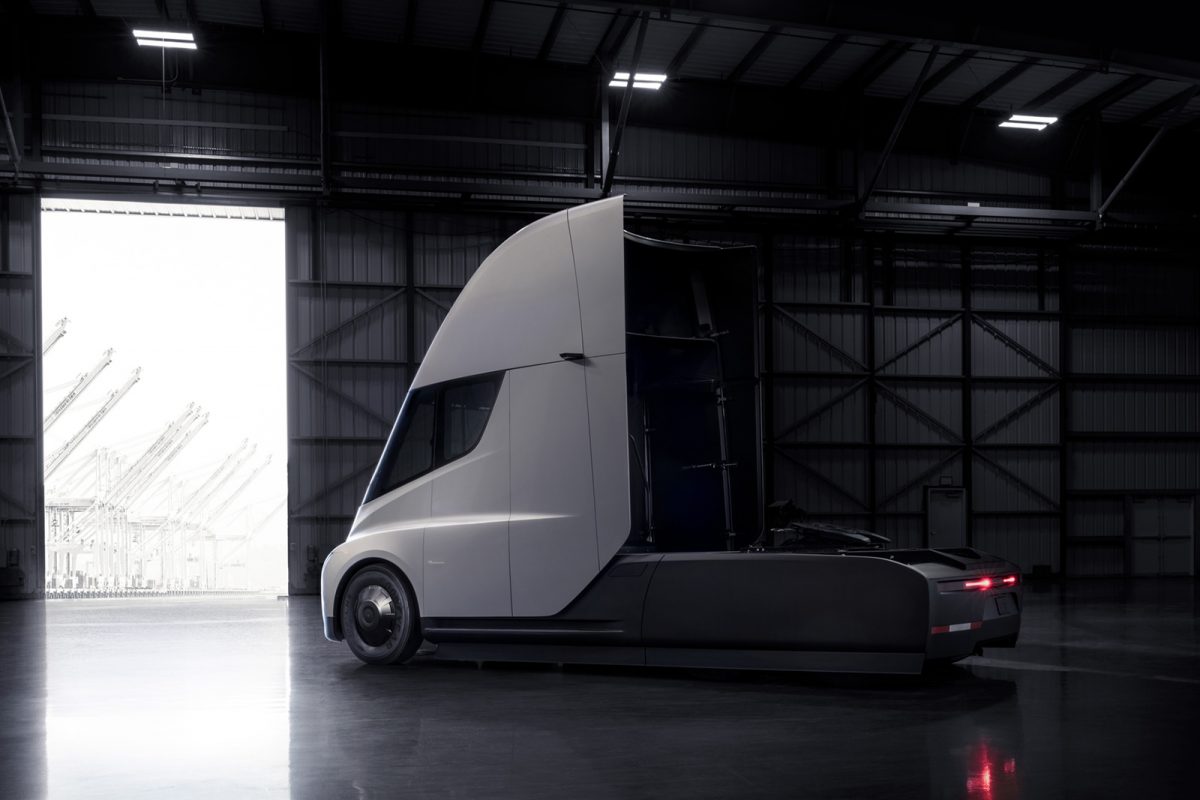 With far fewer moving parts than a diesel truck – no engine, transmission, after-treatment system or differentials to upkeep – the Tesla Semi requires significantly less maintenance. Its battery is similar in composition to the batteries of Tesla energy products and is designed to support repeated charging cycles for over a million miles, while its motors are derived from the motors used in Model 3 and have been validated to last more than one million miles under the most demanding conditions. 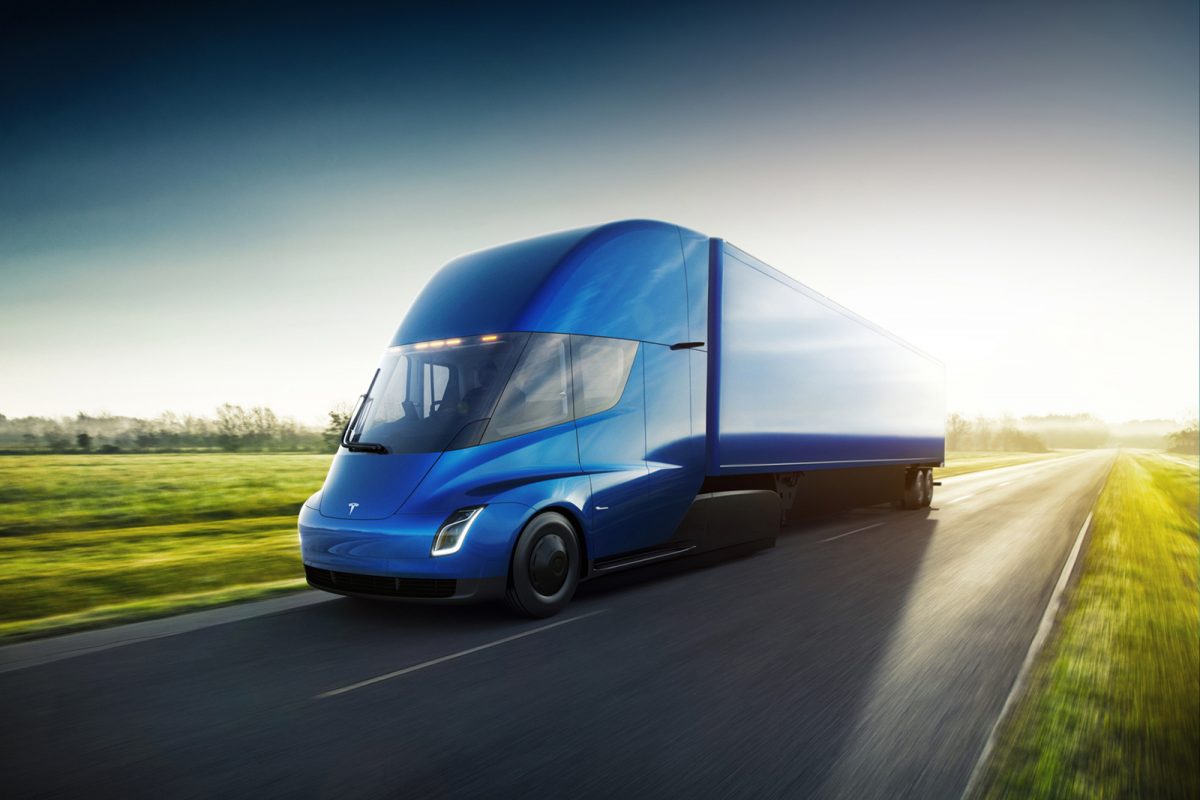 TThe biggest immediate cost-advantage comes from savings in energy costs: fully loaded, the Tesla Semi consumes less than two kilowatt-hours of energy per mile and is capable of 500 miles of range at GVW and highway speed, accommodating a wide range of shipping applications given that nearly 80% of freight in the U.S. is moved less than 250 miles. Coupled with the low and stable nature of electricity prices – which average $0.12/kWh in the U.S. and can be significantly less for commercial and industrial users, falling to almost nothing when combined with local solar generation and storage – owners can expect to gain $200,000 or more in savings over a million miles based on fuel costs alone.

Posted in Commercial EV Transport, EV News, Tesla
← There is a new member of BMW’s i family coming very soon, the i8 RoadsterNew Tesla Roadster will be the fastest production car ever →